Today saw the Irish British Isles Championships competitors win the Natwest trophy for the most succesful country go to Ireland for the 3rd time in the last four years.

Ireland qualified for four of the seven finals and it could have been more with a little lady luck.

John Byrne was first up this morning and ran into a very much in form Ross Owen (Wales). He finished runner up in the U25 final.

Then this afternoon Ireland competed in the U18 Final which was won by Jack Moffett (BanbridgeBC) in a closely contested final against the Scottish representative. I am sure this will be the first of many titles for Jack. 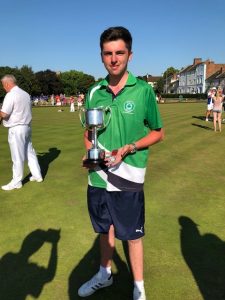 Next to cross the line was Aaron Tennant and Gary Kelly (Ballymoney BC) who were too hot for the English pair. Some excellent lead bowls from Aaron lead the foundation for Gary Kelly who the job off with an easy win. 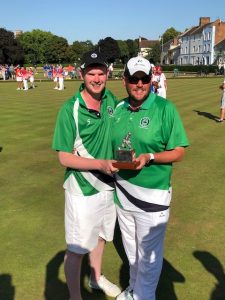 Last but not least was the Senior fours from Cookstown BC. The rink of Tommy Johnston, William Lennox, Eric Sands and Colin Hogg were always in control of the final against England. The England rink pulled close and were lying a count on the 20th end which would have meant a tense last end. However a ‘bomb’ by Skip Colin Hogg turned the jack into the ditch to win the end and effectively the game. 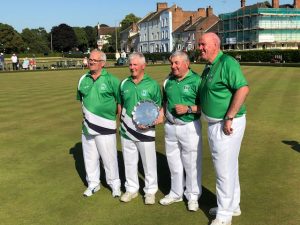 This all meant that Ireland wer the best team overall and allowed Ireland President to collect the Natwest trophy for Ireland. 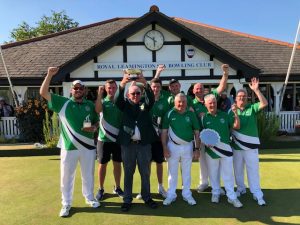 So a victorious Ireland now move on to the International series which begins tommorrow morning with a game against Wales. Can we complete a very successful week?

Follow the live scoring by clicking the link below: