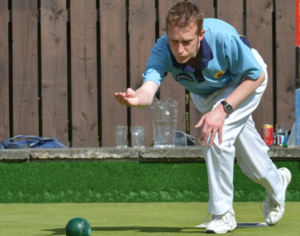 Larne man Andy Kyle was beaten by his former Ireland international colleague Jeremy Henry in the final of the World Cup Singles at the Wiralla Club, Australia.

Competing on his home carpet, Henry wrote his own little chapter in the history of the tournament by becoming the first player to lift the coveted crown for the fourth time.

He made his breakthrough back in 2012 and managed to hold on to the trophy for the next two years. Having lost out in 2015, Jeremy was again crowned champion yesterday.

But Kyle can return home with his head held high. He produced a brilliant spell of bowling to reach the final for the first time.

He narrowly lost the opening set (8-5), before Henry turned on a masterclass in the second, running out a 9-3 winner.

“I’ve had a fantastic week,” Kyle told the News Letter. “My form was great leading to the final… I couldn’t have asked for any better. But Jeremy was awesome… I just couldn’t live with him. He was unstoppable.

“I’m delighted to be returning with the silver medal. I give it my best shot, but he was unbeatable . . . simply super.”