Ireland had a day of mixed fortunes.

In the soaring heat in Ayr today Colm O’Brien in the U18 singles and Cameron Gaw in the U25 Singles both qualified for their respective finals tomorrow. 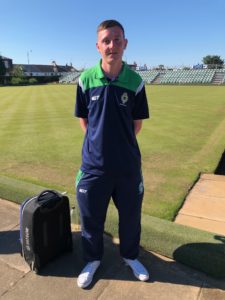 Cameron Gaw (above) will be hoping to win his first British Isles title before making his debut for Ireland in the International series which starts on Saturday.

The Pair of Terry Crawford and Gary Eaton won through to tomorrows final with two very close wins today. Indeed the semi-final went to an exciting tie-end against Wales (photo below) before winning 20-17. 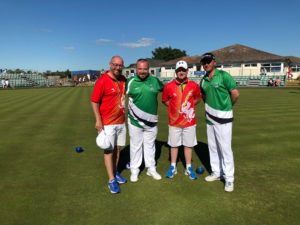 The other semi-finalists today all went close but missed out on a spot in the Triples, Fours and Senior Fours finals. The senior fours came closest when the English skip drew shot with the very last bowl.

Stephen Coleman had lost out this morning in the singles. A game that also went to the limit with Stephen narrowly losing out to Jersey 21-19

All the best to all in the finals tomorrow.

Details of all the games can be found by clicking on the link below: