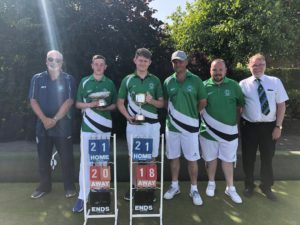 Ireland began the day having qualified to play in three British Isles Finals, namely the U18, U25 and Pairs.

First up was Colum O’Brien (CYM) in the U18 finals against Scotland player David Eaton. In an excellent game both players showed just why they deserved to be in the final. Whilst Colm mostly had his nose in front he just couldn’t shake his opponent and eventually they were tied at 17-17 after 19 ends. The last few ends were enthralling with Colm finishing with two singles to win 21-18 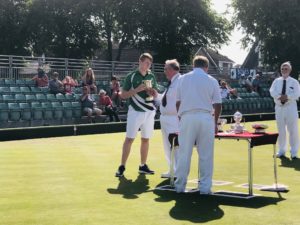 In the afternoon the U25 and Pairs final took place. Cameron Gaw (Donaghadee) played the English champion Danny Mills in the U25 final. Again this was an excellent final played on a difficult rink and again both players held a lead before being pulled back in the game. The English player reached 20 with Cameron on 14 shots. It was then that Cameron show his tenacity and class under pressure scoring 1,1,2,1,2 to get to the magic 21 first and win the title. 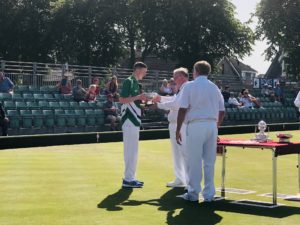 The last final for Ireland was the Pairs final against Jersey. Terry Crawford and Gary Eaton (Salisbury) representing Ireland. This was another super final with a very high standard of bowling. After 15 ends the score was 12-12. Unfortunately the last bowl on the 16th end saw Jersey turn the jack to pick up a count of 6, which would prove fatal to the hopes of the Ireland pair. Jersey winning 20-12. The game was so much closer than the final score indicated.

So a successful BIBC Championship for Ireland.

The attention now turns to tomorrow and the start of the International series. Irelands first march tomorrow morning is against current Champions Wales. Follow the realtime scoring by clicking on the link below.