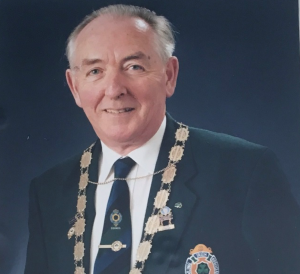 We are sad to report the passing of the former IBA President, J. Gilmour Byrne a day short of his 90th birthday. Gilmour was a dedicated administrator for the sport in Ireland, serving as IBA President in 1993, a role he took on when the original BLI nominee was unable to take up the post. He also served as the BLI President in 1999 and as the BLI League Secretary for many years until 1997, a job he even managed to incorporate into his IBA responsibilities, and for which services he was made an Honorary Member of the BLI.

Whilst he would have admitted he never achieved a notable result in BLI/IBA competitions, he had a remarkable ability to embarrass any bowler with an ego bigger than their skill!

Those of you who knew Gilmour will also be aware of his special, dry sense of humour. If you took Gilmour seriously you could be perplexed. Anyone who tried to be smart with him, would soon be brought back to earth.

Dun Laoghaire Bowling Club will miss their longest standing member, where he fulfilled many administrative posts, including four terms as President. In the last few years, when unable to play, he was a constant supporter at matches and there will be a big space on the banks in Eglinton Park this season.