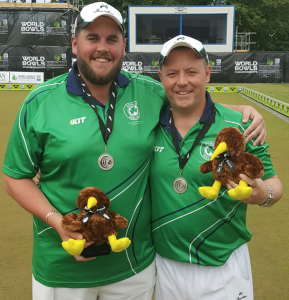 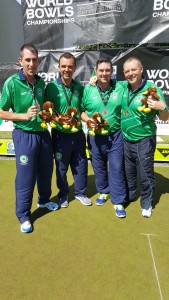 The World Championships are now over and the competition was a great success for the Ireland team.

It was always going to be an enormous challange to be competitive on the Southern Hemisphere greens in Christchurch, New Zealand.

In the first week the Pairs and Triples took place. Gary Kelly and Ian McClure qualified for the Pairs Playoffs, finishing third out of ten in their group. They went on to super wins of 17-10 against both England and then New Zealand to reach the final against Australia. Unfortunately they couldn’t get across the line and came away with a Silver medal. A brilliant achievment from the pair.

The triple of Simon Martin, Neil Mulholland and Marty McHugh also qualified for the playoffs finishing third in their group of ten teams. They played Japan in the quarter-final. In a very close game, after the allotted 18 ends the scores were even. Unfortunately Japan won the subsequent tie-end robbing Ireland of at least a Bronze medal. However this was another very good performance.

In the second week Gary Kelly played in the Singles while the rest played in the Fours. Gary just missed out on the playoffs, finishing fourth in his group of tens countries. The fours went through their group unbeaten with some great wins against England and Australia on the last day. This earned them a place in the semi-final against Australia, who beat the USA in their quarter-final playoff to set up a repeat game against Ireland. Australia came out on top this time, so Ireland had to be satisfied with the Bronze medal.

So Ireland come home with two medals, a silver in the Pairs and a Bronze in the Fours. Every member of the five man team are coming home with a medal. Ian McClure picking up two medals. This is an excellent result and new Ireland manager Neil Booth is to be congratulated on such a successful result in his first major tournament in charge.

Well done everyone in an excellent and rewarding World Championship 2016. 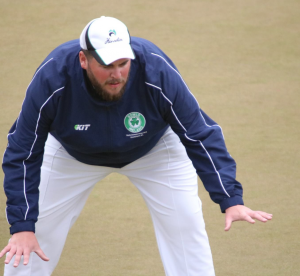 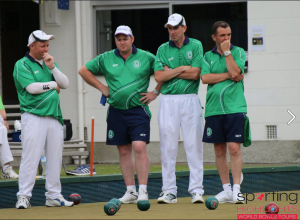 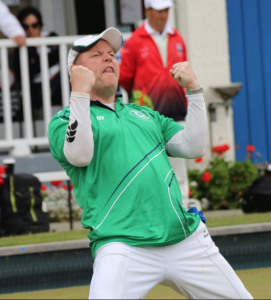 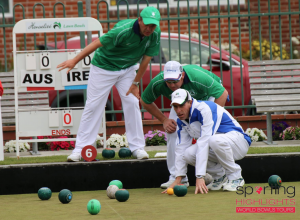