Gary Kelly and Ian McClure lost to Australia in the World Pairs Final last night to win the Silver medal. Although they stopped one step short of the Gold, their performance in reaching the final was fantastic. Finishing third in their group they then played and defeated a very good Engish pair 17-10. This guaranteed a bronze medal as they played the home nation New Zealand in the semi-final. Another super performance saw them win 17-10 to reach the final.

The Triples of Simon Martin, Neil Mulholland and Martin McHugh had also finished Third in their group to reach the playoffs. Unluckily they lost in a tie end, so close to another medal.

Next week is the start of the Singles in which Gary Kelly represents Ireland whist Simon, Neil, Ian and Marty play in the Fours.

We wish them all the best and here’s hoping for a couple more medals. 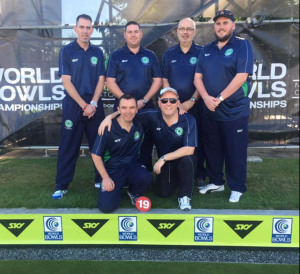